Every year, like clockwork, there seems to be a new theory that arises to explain away

the Easter event, i.e., that Jesus Christ rose from the dead, bodily, and appeared to His apostles and convinced them He was alive.

Historically, it’s true that the apostles—so convinced—went out and began to turn the Roman Empire upside down with the message of forgiveness through the cross and resurrection. Now roughly a third of humanity claims to believe this historic message.

In past years, theories to explain away the Easter event have included:

∙Jesus the Man which presents Him as a divorced father of three, who later remarries.

∙Jesus: A Revolutionary Biography, which proposes that Jesus didn’t rise from the dead because He was never buried in the first place. His corpse was instead eaten by dogs.

∙The Lost Tomb of Jesus TV special a few years ago declared Jesus did not rise from the dead, but the disciples cleverly stole the body. (I would ask: Why? So then they could go on to the horrible martyr’s deaths most of them experienced? What would they gain?)

But now comes a strange new theory to explain away the resurrection of Jesus.

An art historian with ties to Cambridge University, Thomas de Wesselow, has written a book called, The Sign. As best I understand this new theory, he believes that the Shroud of Turin is truly the authentic shroud that Jesus was laid in (which I also believe). But he goes on to propose that Jesus didn’t really rise from the dead after all. Instead, the apostles simply saw the Shroud with its mysterious image and believed.

Writing about this new book’s thesis in the UK Telegraph (March 24, 2012), Peter Stanford notes, “Having established – at least for the purposes of argument – the Shroud in first century Israel, it is now time to turn to his potentially even more earth-shaking theory, namely that the Resurrection was a kind of optical illusion.”

The illusion, as described by Stanford, is this: “What the apostles were seeing was the image of Jesus on the Shroud, which they then mistook for the real thing. It sounds, I can’t help suggesting, as absurd as a scene from a Monty Python film.” (And how exactly did that image get on the cloth? And this convinced them to the death?)

Here’s some important background information on the world’s most scrutinized artifact: The Shroud of Turin, a linen cloth 14 feet by 3 feet, contains the image of a man who was badly scourged, was crucified, wore a crown of thorns, and was stabbed in the chest with a Roman spear.

One of the great experts on this subject is Dr. Alan Whanger, a retired professor from Duke Medical Center who has spent his life studying medicine. Since the late 1970s, he has studied intensely the Shroud of Turin. I’ve interviewed him many times.

Although the Shroud was dismissed by some as a fake because of the carbon-dating in 1988 of a single specimen (divided into three tiny parts) that was said to date from 1260 to 1390 A.D., Dr. Whanger says that test was not valid because the sample chosen was from a rewoven part of the cloth (which was often displayed during the Middle Ages).

Furthermore, Dr. Whanger notes, “The Shroud is the most intensely studied single object in existence. There are probably 67 different fields of scientific and academic interests that have looked into the Shroud in one way in another. So, there’s been a huge amount of research gone in on it. It is our conviction that the Shroud is, indeed, the burial cloth of Jesus of Nazareth. And we feel that we can date it to the spring of 30 A.D. in the Middle East, and that what we see on the Shroud with the various wounds, that this is entirely consistent with the scriptural account of the crucifixion of Jesus. And traditionally, this has been known as the image of Jesus.”

We know where the Shroud has been since 1357, when it showed up in the home of a French crusader. Knowing it dates from 1357 or earlier, consider these details:

I agree with de Wesselow that the Shroud is authentic, but to me, it points to the resurrection, not away from it. 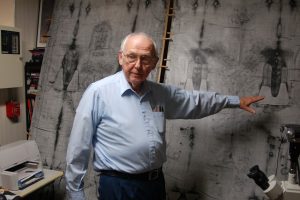 Comments from Some Pro-Life Leaders on 50 years of “Roe v. Wade”