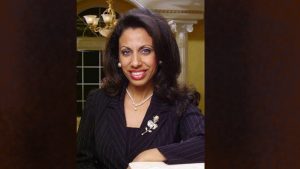 Topic: Getting Americans to Appreciate America.

Brigitte Gabriel, originally from Lebanon, had a dream to come to America—and she was able to do so about 30 years ago. But she notes that the America she came to was not the same as today’s America. She said, “America today is being transformed before our very eyes. The flag that once flew on every street corner in the United States is now considered a hate symbol on college campuses. Athletes who used to break down in tears of pride during the national anthem are now leading a protest. Patriotism is seen as hateful. Our police are being attacked by criminals and thugs while the mainstream media victimizes their killers. Christmas is under assault. Prayer in schools is under assault. You cannot even Christmas break right now, you call it winter break….The left has organized, they are mobilized, they are organized.” Brigitte Gabriel, author of the book, Rise, is the Chairman of ACT for America, which has chapters throughout the nation, joins Jerry Newcombe on how can we get Americans to appreciate America? www.actforamerica.org