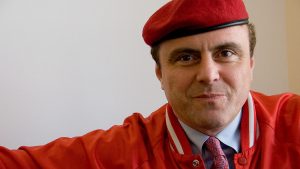 Should there be term limits to politicians? Yes, says Curtis Sliwa, and New York Senator Chuck Schumer is a great example of why that should be the case. To Curtis Sliwa, founder of the Guardian Angels and Republican candidate for the recent New York City mayoral race, senate leader Chuck Schumer represents much of wrong in American politics today. Sliwa notes, “Though we came up short in our mayoral campaign, my movement for change progresses onward. I am more committed than ever to advancing our Republican values and priorities and holding liberal elitists accountable for failing New York and America. Next up: Senator Chuck Schumer….Between the rising cost of living, a broken healthcare system, struggling public schools, and lack of affordable housing, it is clear that Senator Schumer’s primary concern is keeping himself and his cronies in power.” Curtis Sliwa joins Jerry Newcombe on Vocal Point to discuss why politicians like Chuck Schumer should be term limited. www.stopschumer.com