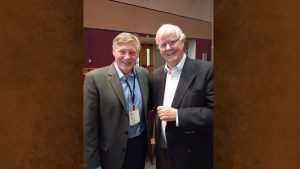 Topic: “The Magna Carta of Humanity.”

The repercussions of the American Revolution of 1776, which said our rights come from God, are still with us today. But so also are the repercussions of the French Revolution of 1789, which was anti-faith at its core. Bestselling Christian author and thinker, Dr. Os Guinness, has written a book entitled, “The Magna Carta of Humanity.” On the Amazon page for the book, they note: “Cultural observer Os Guinness explores the nature of revolutionary faith, contrasting between secular revolutions such as the French Revolution and the faith-led revolution of ancient Israel. He argues that the story of Exodus is the highest, richest, and deepest vision for freedom in human history. It serves as the master story of human freedom and provides the greatest sustained critique of the abuse of power.” Dr. Os Guinness joins Jerry Newcombe to dicuss the “Magna Carta of Humanity.”