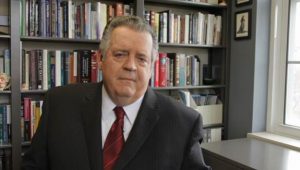 Topic: The “Unalienable” Right to Life

The Declaration of Independence says we have been endowed by our Creator with the “unalienable” right to life. Dr. Richard Land, executive editor of The Christian Post and the president emeritus of Southern Evangelical Seminary, wrote his column on the Mississippi abortion case that the U. S. Court has agreed to hear in this term. He notes: “I am often asked why I speak out on the abortion issue as frequently as I do. To me, that question would be analogous to asking Martin Luther King, Jr. why he focused so much of his life and ministry on fighting for equality under the law and in society for all Americans…only 10 countries in the world have abortion laws as radical as ours are, including most notably Communist China and North Korea…. As the great Catholic philosopher Peter Kreeft observed, ‘America’s Civil War was about liberty. Our current abortion war is about the even more fundamental right, life.’” Dr. Richard Land, who studied at Princeton and earned his doctorate at Oxford, joins Jerry Newcombe on Vocal Point to discuss the battle over abortion. www.christianpost.com