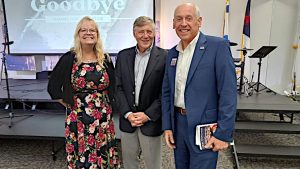 What are the burning issues today and where does your Congressman stand on them? Joe Budd is running for Congress, for a seat in the U.S. House of Representatives on behalf of many south Florida residents. Joe Budd has experienced much success in business, but he learned much from a business that went under many years ago. One of his favorite quotes is from Ben Franklin, “Things that hurt instruct.” Joe Budd, a committed Christian, joins Jerry Newcombe on Vocal Point to discuss many of today’s issues and where he stands on them, such as Hurricanes supposedly caused by climate change. Crime. The Economy. Inflation. Education—including Critical Race Theory, the transgender agenda.. Abortion. The Debt. The border. www.votejoebudd.net