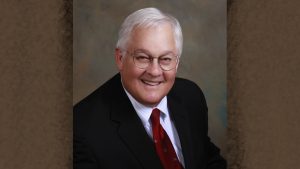 Topic: Has the First Amendment Been Distorted?

The First Amendment to the Constitution begins, “Congress shall make no law respecting an establishment of religion or prohibiting the free exercise thereof.” But beginning in 1947, the Supreme Court took an obscure letter from Thomas Jefferson that he had written to a group of Baptists in Connecticut, and he quoted the first amendment and said this means that they intended to erect a wall of separation of church and state. Once that became the understanding of the First Amendment, then the Supreme Court eventually outlawed school prayer, the Bible in the schools (at least as devotional readings), the ten commandments posted on the school or even courtroom wall, etc. Darrell White, president of Retired Judges of America, joins Jerry Newcombe on Vocal Point to discuss how the First Amendment has been distorted by this idea of separating God and government. www.ajatoday.com