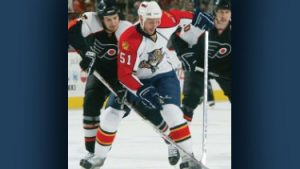 It is common for some committed Christian athletes to be public about their faith in Jesus and how that helps them. There is an organization called Hockey Ministries International that is about 50 years old. Their headquarters are in Quebec. Their mission statement is “Reaching the world of Hockey, every player, every team, everywhere, with the message of hope found in Jesus Christ.” They do this through chapel services, summer camp programs, and other events. Representing Hockey Ministries is Rob Globke. The ministry says of him QUOTE “Rob Globke grew up playing hockey, played at the University of Notre Dame where he still has some scoring records and then he played in the National Hockey League for the Florida Panthers. He currently works full time with Hockey Ministries International (HMI) and is responsible to oversee and expand their chapel programs in hockey.” On February 3-4, 2023, the National Hockey League will host the All Star game which consists of the best players from across the league who will come to Fort Lauderdale to play a game. HMI writes, “During that weekend, the NHL has provided Hockey Ministries with a ball room at the Westin Fort Lauderdale Beach resort to use to host an outreach breakfast whereby we will have former hockey players and some current players share their faith. The purpose of the event is to use hockey as a vehicle to share the gospel. We are hoping to attract hockey fans or anyone who is interested to hear about lives that have been changed by the faith and hope that we profess in Christ.” The event is Feb. 4, 8-9:30 at a hotel in Ft. Lauderdale near the beach. Rob Globke joins Jerry Newcombe to discuss ministry among hockey players and fans. www.hockeyministries.org