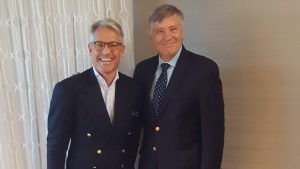 In the 1960s, TIME magazine had a famous cover with a black background and white lettering, asking, “Is God Dead?” Today, #1 New York Times bestseller Eric Metaxas has a new book, and the cover has a black background and white lettering, asking “Is Atheism Dead?” America’s founders said our rights come from the Creator—so the God question is at the heart of our country’s founding. An earlier book of Eric dealt with the American republic entitled, If You Can Keep It, which underscores the point that the founders expected Americans to be moral (in the Judeo-Christian sense of the term) or the American experiment may flounder. Eric Metaxas, who also serves as a radio and television host and public speaker, joins Jerry Newcombe to discuss God and America. www.ericmetaxas.com